skip to main | skip to sidebar

This morning Miss Avery woke up pretty congested but since we live in "death valley" when it comes to allergens, I wrote it off as just more pollen in the air. Avery was acting like herself until....

I put her down for her morning nap. Now, during the week, homegirl doesn't nap at day care. I think she's afraid she'll miss something. At least she handles it well and is normally happy. But on the weekends, she will nap for about an hour in the morning and again in the afternoon. Well this morning she slept for only 20 minutes. When she got up I was holding her while I was finishing watching the season finale of Grey's (OMG! it was a good one! I hope they don't die!) Avery just laid on me and cuddled. She fell asleep on my chest and this is SOOOOO unlike her. She hadn't felt warm but I figured I'd go check again.

Her temp was 99.6 according to the Exergen. I love that thermometer for a quick check. After a little while Avery felt warmer and after a recheck, her temperature was 101.2! I called the pediatrician and they said she probably had a fever virus and to go ahead and treat it today and then bring her in tomorrow if she still has a fever.

Poor baby. She has been so miserable but still happy. I walked into the living room where she was sitting on the floor playing with her leap frog table with Robert and she looked at me and cracked up. I have no idea what was so funny but apparently I was the funniest thing she had seen today.

My very good friend Lauren of Instinct Parenting called me about 2 months ago asking if I could be a "mommy reviewer" of a new product she found. The product is called the FlowSpoon. She told me that it was a new spoon that would help ease the transition from breast/bottle to solids. I was EXCITED about the opportunity to try something new. You never know if it might be the next VELCRO product, ya know?

So - on April 7, 2009, on Avery's 6 month Birthday, I pulled out the homemade butternut squash I had baked and carefully frozen into 1 oz portions, and prepared to start solids for the first time. Here we go... once we started solids, our 'life' would be changed. A whole new event was being added to our daily routine and never again would we change a "breastfed" baby poopy diaper...

I used the FlowSpoon. to feed Avery and I really liked how UNMESSY it was compared to the regular take 'n toss spoons I had, but I had difficulty "reloading" the spoon. I was using small, 4 oz plastic cups to hold thawed squash in and I just couldn't seem to get the spoon into a good position to get the pureed vegetable in to the spoon.

However, when I did get it filled up, Avery emptied it like a champ. She was familiar with the soft roundness of the tip of the spoon and was used to the sucking motion to get stuff IN her mouth. The squash puree that we used was just that - pureed squash. I did not thin it out much because I had read that it's best to add needed liquids to foods AFTER they thaw since some foods tend to get a little more watery/runny. Avery seemed to be ok with the thicker pureed squash though so I went back to the old saying of "if it ain't broke..."

I did however, think many times that it might just be because Avery was older, and REALLY ready for solids that she didn't need the transition spoon. She never had any issues with eating, or switching back and forth from breast to bottle; she has been a relatively EASY baby with very few difficulties. She never spit out any of the food and ate it right up. The new experience was FUN for her. We might not have been such a great test case for it because of this. BUT... if I had started her earlier on a runny rice cereal mixture, I think the FlowSpoon. would have been an AWESOME tool to help a baby learn to EAT solids. It's a much better alternative to putting rice cereal in a bottle. And some babies are not as aware of their surroundings/environment, so they may need some help getting the hang of the new skill of EATING.

I have included some pictures of Avery's first solids. (the mess is more of mom's user error than baby not eating :) ) and I really promise she enjoyed it!!! She just has some special faces she makes. Even 5 weeks later, we haven't found a food she WON'T eat, she will just make a face and keep on chewing.

A very dear friend of ours is battling brain cancer. Floyd has been part of my entire life. Lesa, his sister, has been best friends with my mom since they were 15 years old - so to say they are like family, is an understatement - they ARE family. We found out about the tumor around Thanksgiving 2007 - Christmas 2007 was supposed to be his last. Here is a picture from Christmas 2008. He is sitting with "Great Grandma Gilmore".

He is already beating the odds and I would love to be a part of helping him continue along the same path.

I just received an e-mail about raising money to help send him to Oklahoma for a 'new' treatment that has yet to be covered by medical insurance but seems to have good/positive effects on his type of tumor. They are trying to raise $10,000 for this treatment.

If you are a follower/reader of my blog, and feel at any way willing to donate, I will collect the money to send to them. I think pay pal may be an option? My paypal e-mail address is sdmorge@yahoo.com.

Here is the e-mail I received from Lesa regarding raising the funds.

If we've talked in the past 10 days, you know that we are trying to put together funds to send Floyd to Oklahoma for an alternative treatement that has shown a great deal of promise in defeating Glioblastoma. We have talked to several people that have been through the treatment and so far, they are cancer free. With each case, the physical effects of the disease have reversed to a degree and they are living relatively normal lives. As Floyd's condition continues to deteriorate, we know it is important to get him there as soon as possible. The cost for the treatment is $10,000 and so far, we have raised a part of that, but we don't have much time and we are asking everyone to help by asking as many people as you are comfortable asking to donate whatever they can, even $5 will put us that much closer. Unfortunately, because this is an alternative treatment in the United States, it is not covered by medical insurance. If each of us does what we can, we know that we can get him there and that this treatment will help him live. Thank you to each of you for your support, friendship and encouragement. Whatever the future holds, we appreciate and love you all.

The account is set up at Washington Mutual, which is actually Chase Bank now, and the account number is 4462078845. Thank you for whatever you are able to do.

Lila Guide is a spinoff from The Nest that holds many local product/event reviews for your child. They had a kid of the day contest and I couldn't resist.

The Lila Guide - is officially the Avery Guide - until the next kid wins!

Yesterday we were at Karin's house and Avery FINALLY rolled over. Of course she does it the hard way - Back to Belly.

Fast forward to about 2:15 into the video

I love how I'm trying to tell Robert to help her get her hand unstuck and he pushed her back over... classic

Only a face a mother could love...

Ok, not really - Avery is beautiful, but she's a funny, very spirited baby. Last week when I picked her up at Day Care, they gave me these pictures they took of her while trying to catch a smile. To date, I have not been able to catch that cute gummy baby smile. 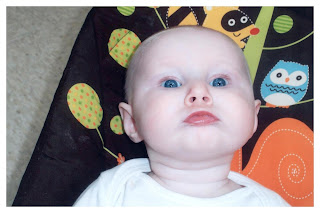 The 2nd picture is my favorite - its saying "NO WAY! you can't get me to smile!" I LOVE IT!

Her new "trick" is to blow raspberries. It must be the vibrations on her lips that feel good or something but she just LOVES it. And - it calms her down. She can be fussy, whiney, tired and then realize that blowing raspberries will make it better. Our laptop broke but I have a great video that I will post of her doing this and BELLY LAUGHING!

The best thing ever!!!

My Daughter, the flirt

I knew we'd be in trouble with those big baby blues, but I didn't realize it was going to start this early. It started her first day of Day Care. There is a very sweet boy in her class that she absolutely adores. There is just something about Nico that makes her lose focus on everything else around her and she fixates on him.

Back to Day 1. I went to pick up Avery in her class. She is laying on the mat kicking her legs, minding her own business and Nico shimmied his way over to her, leaned forward and planted his mouth firmly on the side of her little head... Kissing boys at day care already.

So since then, they have become friends. She thinks his noises are funny and just loves to watch him and laugh at him. Miss J told me yesterday he was sitting in front of her while she was in the bouncy seat and he would make faces, she would belly laugh. Sort of like she is saying "You silly silly boy."

Yesterday, the Director told me that Avery and Joseph were on a date in the classroom next door. What? What happened to Nico? Sure enough, I walk in and see Joseph and Avery (Due Date twins) sitting next to one another in their bouncers holding hands and laughing together. How stinkin' cute is that???

I really need to bring the camera in and take pictures of all of this!

"Valley Baby of the Month"
You can vote daily! 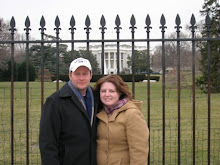 In front of the White House - the Day before we found out about Baby!!!